Markets in Everything: The Anthony Weiner Action Figure 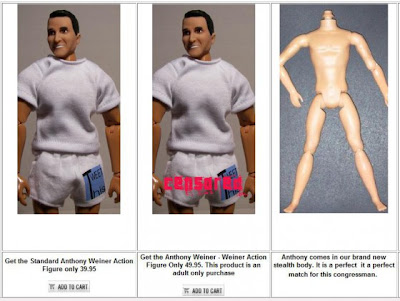 The Weiner action figure can be found online at: Herobuilders.  The Australian reported:


A TOY company known for producing action figures of US political figures has started advertising its latest addition, the Anthony Weiner doll.

Herobuilders.com is offering two versions of the doll modelled after the New York Democrat who shot to fame around the world last week after admitting to having sent a lewd photo of his crotch to a Seattle college student on Twitter.

Both figures are dressed in a T-shirt and gym shorts — with the words “tweet this” printed on the shorts.

The Grouch:  It's time for Rep.Weiner to respect the office by resigning his position in Congress, and recognize that his conduct was disgraceful and inappropriate, and outside the norm of acceptable behavior.  He should just go away quietly, get the help he needs and heal his relationship with family and friends.  I hope he has the good sense to stay away from public office again, and live the rest of his life without much fanfare in the private sector.
Posted by The Grouch at 6:00 AM

Labels: Markets in Everything