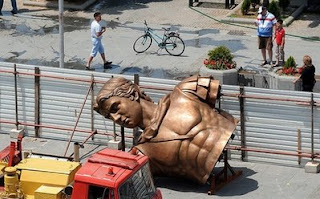 With each day that goes by, Greece looks more and more likely to default on their debt. Their citizens are unwilling to accept the austerity measures required by any potential debt settlement. Will Greece split from the EU and go back to the drachma? Who knows. Will the contagion spread to the other PIIGS and bring down the world economy like the economic crisis of 2008? Who knows.

So what's an investor to do? For money that is already invested, the best advice is to ride it out and over time markets will recover, and you'll get back to break even and eventually return to the black. Remember, the issue is not where markets will be tomorrow or next week, but where they will be in 20 to 30 years or longer. For anyone with new money to invest, I'd probably sit on the sidelines until it looks like we've reached the point of maximum pessimism for this crisis and then start nibbling at the markets. It's hard to control emotions, but those that can will take advantage of this crisis to pick up stocks at cheap prices.
Posted by The Grouch at 5:34 AM