4 Pinocchios for the 2012 PolitiFact Lie of the Year

Some may recall that PolitiFact (boy, there's an oxymoron if I ever saw one) named Mitt Romney's add claiming that Barack Obama "sold Chrysler to Italians who are going to build Jeeps in China" at the cost of American jobs as the lie of the year for 2012.

Well, lo and behold, on 1/13/2013 Reuters reports that "Italian carmaker Fiat and its U.S. unit Chrysler are set to sign a new agreement with Guangzhou Automobile Group Co to produce the Jeep vehicle for the Chinese market, Il Corriere della Sera said on Sunday. In an unsourced article, the Corriere said the head of Fiat and Chrysler Sergio Marchionne could announce the agreement at the Detroit auto show, which kicks off on Monday. Under the agreement, off-road vehicles under the Jeep brand will be produced at GAC's Canton factory, the paper said."

So now who is lying and who is telling the truth? This revelation surely won't change the outcome of any elections, but it goes to show there are few "facts" when it comes to politics, and the "fact checkers" are more driven by political ideology than the pursuit of the truth. Keep that in mind the next time any organization claims to "fact check" anything. 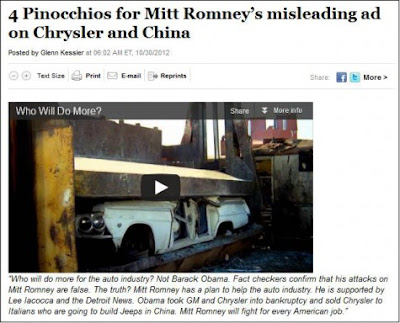