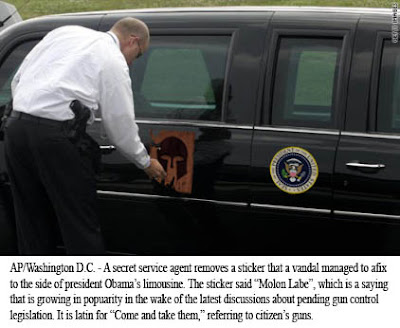 The phrase molon labe (Ancient Greek μολὼν λαβέ molṑn labé; reconstructed Ancient Greek pronunciation [molɔːn labé]; Modern Greek pronunciation [moˈlon laˈve]) means "Come and take them". It is a classical expression of defiance reportedly spoken by King Leonidas I in response to the Persian army's demand that the Spartans surrender their weapons at the Battle of Thermopylae (many of you may have seen the movie The 300).

Instead, the Spartans held Thermopylae for three days and, although they were ultimately annihilated, they inflicted serious damage upon the Persian army, and most importantly delayed its progress to Athens, providing sufficient time for the city's evacuation to the island of Salamis. Thermopylae served as a moral victory and inspired the troops at the Battle of Salamis and the Battle of Plataea.

Some words of wisdom on the 2nd Amendment from Walter Williams: