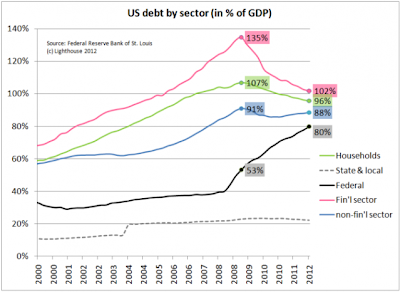 The Federal Governments has bravely (or not so bravely) decided to fight the deleveraging trend in the economy. With the financial crisis of 2008-2009, it was painfully obvious that the overall debt burden carried by individuals, corporations and governments needed to be reduced, and the impact of this deleveraging would slow economic growth around the world for many years, but lay the foundation for a future economic growth. The private sector has read the tea leaves and is getting their financial house in order, while the Keynesians in government have stepped on the gas pedal. So the question looms: has the economy deleveraged at all? Does private sector debt count more than public sector debt or vice versa? Can you have a solid recovery if governments need to drive interest rates to zero so they can continue to service their debt? Are we setting the table for another round of stagflation as in the 1970's?
Posted by The Grouch at 5:36 AM