Several days have passed since the Supreme Court ruling on Obmamacare. The passage of time has not mellowed this decision--- it still stinks to high heaven. To think that the Chief Justice of the Supreme Court would violate his oath of office--- "I will support and defend the Constitution of the United States against all enemies, foreign and domestic; that I will bear true faith and allegiance to the same; that I take this obligation freely, without any mental reservation or purpose of evasion; and that I will well and faithfully discharge the duties of the office on which I am about to enter"--- and succumb to political pressure is truly repugnant and inexcusable. To add insult to injury, the twisted logic of the decision has set a precedent for future governmental abuses of its citizens. I would paraphrase Roberts reasoning as follows:

All citizens are free not to eat broccoli, but very inaction of not purchasing broccoli will trigger a penalty from the IRS who is monitoring your lack of broccoli purchases. But let's get creative for a moment and not call this a penalty, even though the statue calls it a penalty and numerous administration officials from the President on down insist that it is penalty not a tax, let's call this a tax, and as everyone knows Congress has the power to tax you for not eating broccoli. Therefore, now that the Court is pretending a penalty is a tax the statute must be Constitutional.

This is classic legislating from the bench, not interpreting the law as written.

The minority justices have applied the law correctly in their dissent:


Our cases establish a clear line between a tax and a penalty: “[A] tax is an enforced contribution to provide for the support of government; a penalty … is an exaction imposed by statute as punishment for an unlawful act.” United States v. Reorganized CF&I Fabricators of Utah, Inc., 518 U. S. 213, 224 (1996) (quoting United States v. La Franca, 282 U. S. 568, 572 (1931)). In a few cases, this Court has held that a “tax” imposed upon private conduct was so onerous as to be in effect a penalty. But we have never held—never—that a penalty imposed for violation of the law was so trivial as to be in effect a tax. We have never held that any exaction imposed for violation of the law is an exercise of Congress’ taxing power—even when the statute calls it a tax, much less when (as here) the statute repeatedly calls it a penalty.

The supreme irony of this decision is that Justice Roberts in succumbing to the political pressure not to delegitimize the Court has in fact delegitimized both himself and the Court by compromising the Court's integrity. This ruling is destined to go down in history along side Wickard v. Filburn and Dred Scott v. Sandford as one of the worst decisions in the history of the Court. Shame on you Justice Roberts. 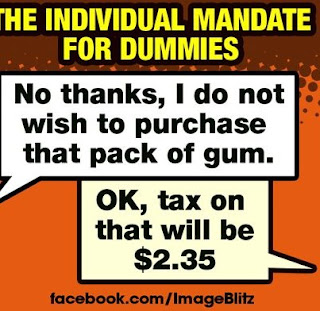