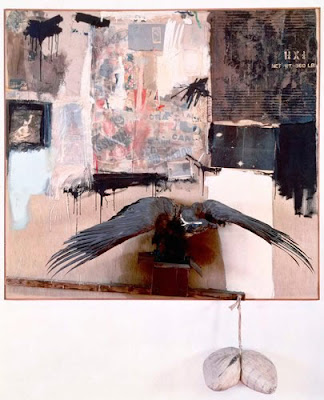 Death Wealth taxes hit people in different ways.  Take the heirs of New York art dealer Ileana Sonnabend. The artwork pictured above is “Canyon,” a masterwork of 20th-century art created by Robert Rauschenberg that Mrs. Sonnabend’s children inherited when she died in 2007. Because the work, a sculptural combine, includes a stuffed bald eagle, a bird under federal protection, the heirs would be committing a felony if they ever tried to sell it. So their appraisers have valued the work at zero. But the Internal Revenue Service takes a different view. It has appraised “Canyon” at $65 million and is demanding that the owners pay $29.2 million in taxes. Although they can’t sell the work for even a penny, the heirs have to come up with nearly $30 million. It would at least ease the financial pain to donate the piece and take a deduction, except... given their income and the limits on deductions, [their lawyer, Ralph Lerner] said, they would be able to deduct only a small part of the work’s value each year. Mr. Lerner estimated that it would take about 75 years for them to absorb the deduction. By then they would be long gone from this earth, and their heirs would be grappling with the same wealth confiscation taxes that they are now dealing with. There is an awful lot of greed and envy in the world, and not just in the private sector.