H.R.3784 begins: "To amend the Internal Revenue Code of 1986 to impose a windfall profit tax on oil and natural gas (and products thereof) and to allow an income tax credit for purchases of fuel-efficient passenger vehicles, and to allow grants for mass transit."

Six members of the House, led by non-free market champion Denis Kucinich (D-OH), want to set up a "Reasonable Profits Board" to control gas profits. The Congressmen, worried about higher gas prices, want to set up a board that would apply a "windfall profit tax" as high as 100 percent on the sale of oil and gas, according to their legislation. The bill provides no specific guidance for how the board would determine what constitutes a reasonable profit, but would set up a Reasonable Profits Board made up of three presidential nominees that will serve three-year terms.

Grouch: This is yet more quackery from Congress disguised as consumer advocacy, but whose real purpose is to artificially manipulate markets and ultimately punish consumers with less supply and higher prices. One can see in the chart below just how the price of natural gas has skyrocketed without proper government supervision: 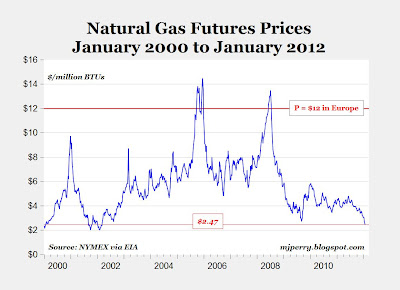 Right now there is an oversupply of natural gas in the marketplace and declining prices (those greedy capitalist pigs!). But our enlightened Congressmen are working overtime to correct this situation.

Just as a point of reference, the average industry in the US according to Yahoo Finance has a profit margin or 7.8%. The oil and gas industry profit margin comes in at an eye-popping 7.9%. What an outrage! How can this stand, when other industries have more reasonable profit margins: publishing (53%), silver (41%), gold (25%), cigarettes (22.5%)? Not to mention Apple, the favorite company of the politically correct crowd, coming in slightly north of 23%, or the much hated Microsoft at 31%. Comrades, we can not continue to let the marketplace operate freely at such obscene profits levels. This bill is clearly not expansive enough. We need a Commissar of Reasonable Profits for every industry in the country.

As George Will noted at the start of the year:


In 2011, for the first time in 62 years, America was a net exporter of petroleum products. For the foreseeable future, a specter is haunting progressivism, the specter of abundance. Because progressivism exists to justify a few people bossing around most people and because progressives believe that only government’s energy should flow unimpeded, they crave energy scarcities as an excuse for rationing — by them — that produces ever-more-minute government supervision of Americans’ behavior.