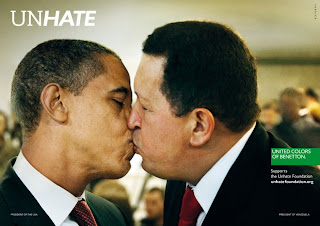 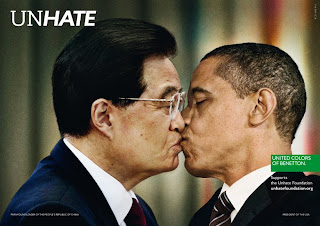 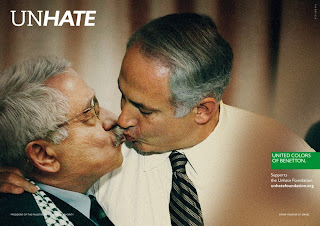 What does unhate mean?  UN-hate or stop hating altogether?  I'm not really sure, and this ad campaign, besides grossing me out, is not exactly presenting a clear and compelling message.

The Benetton has dropped the image of the Pope kissing an Imam from the campaign after complaints.

Benetton returns to its controversial marketing roots with a new campaign that features President Obama and other world leaders engaging in a kiss. In two separate ads, Obama is seen kissing Venezuelan president Hugo Chavez, and Chinese President Hu Jintao.

The Unhate Foundation, founded by the Italian clothing company, is an advocacy group for tolerance. The controversial ad campaign is an attempt for Benetton to regain its status from the “United Colors” ads that regularly shocked viewers with subjects that had nothing to do with clothing: A priest kissing a nun, a man dying of AIDS, a just-born baby with umbilical cord still attached, a trio of real human hearts.

In the new campaign, the leaders of North and South Korea lock lips, and the Pope kisses Ahmed Mohamed el-Tayeb, the Imam of al-Azhar mosque in Egypt. The Vatican condemned the image, and the company decided to remove it from all publications after complaints. German Chancellor Angela Merkel smooches Nicholas Sarkozy, president of France (What will Carla Bruni think?). Palestinian President Mahmoud Abbas and Israeli Prime Minister Benjamin Netanyahu also share a kiss. The campaign was inspired by a kiss between Soviet leader Leonid Brezhnev and East German communist leader Erich Honecker in 1979.