Elvis has Left the Building 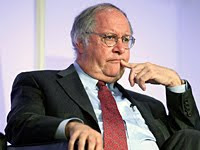 The last of the mutual fund rock stars, Bill Miller of Legg Mason Value Trust, has decided to give up active management of that fund in the near future to assume the role of Chief Investment Officer.

Bill Miller became a household name and his fund, a member of many 401k plans, amid a 15-year streak of beating the S&P 500, beginning in the early 1990s. But in recent years reversion to mean has punished Miller run funds and their shareholders mightily.

Some might argue that the era of the mutual fund and superstar stock pickers have gone the way of AOL, one of the stocks Miller built his reputation on. Ultimately, Miller's gunslinging twist on value investing was unable to match his past superior performance due to his love of financial stocks and an expense ratio of over 1.76% at a time when certain ETFs and index funds are charging as little as .07% in fees.
Posted by The Grouch at 5:38 AM