A Random Act of Journalism: How Congress Critters Enrich Themselves

A random act of investigative journalism occurred last night on CBS's 60 minutes. In case you missed it, I've embedded the video below:

(CBS News) -- "Martha Stewart went to jail for it. Hedge fund honcho Raj Rajaratnam was fined $92 million and will go to jail for years for it. But members of Congress can do the same thing -use non-public information to make stock trades -- and there's no law against it. Steve Kroft on "60 Minutes" reports on how America's lawmakers can legally make tidy profits on information only they know, simply because they won't pass a law against themselves.

If senators and representatives are using non-public information to win in the market, it's all legal says Peter Schweizer, who works for the Hoover Institute, a conservative think tank. He has been examining these issues for some time and has written about them in a book, "Throw them All Out." "Insider trading laws apply to corporate executives, to Americans...If you are a member of Congress, those laws are deemed not to apply," he tells Kroft. "It's really the way the rules have been defined... lawmakers have conveniently written them in such a way as they don't apply to themselves," says Schweizer.

Efforts to make such insider trading off limits to Washington's lawmakers have never been able to get traction."

Update:  A 2011 research article in the journal Business and Politics ("Abnormal Returns From the Common Stock Investments of Members of the U.S. House of Representatives") found that the stock portfolios of House of Representative members outperformed the overall stock market by 55 basis points per month, or 6.6% on an annual basis between 1985 and 2001, suggesting that lawmakers have a "substantial informational advantage" over the general public and even over corporate insiders. 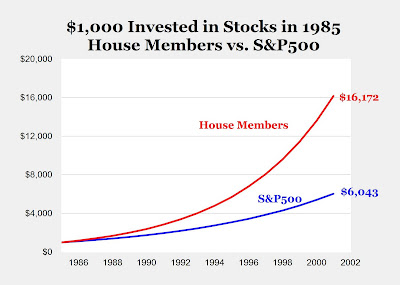 Grouch: I thought the 60 Minutes piece was much less scathing than it could have been and should have been. Corruption in Congress and Government in general runs deep in both parties. This was a surface treatment of the issue. treading lightly around the problem. I would have expected a more penetrating report from this reputable news organization. For a deeper look at the problem see Government Gone Wild! -- How Congressmen Enrich Themselves While in Office. 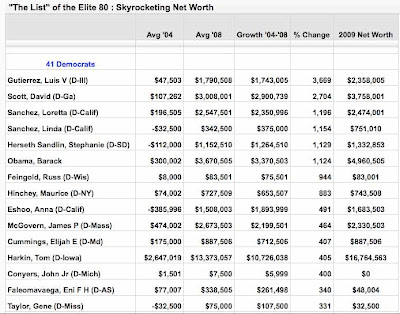 CLICK HERE TO SEE MORE
Posted by The Grouch at 12:29 AM