What if The NFL Was Run Like America’s Schools?

"Imagine the National Football League in an alternate reality. Each player's salary is based on how long he's been in the league. It's about tenure, not talent. The same scale is used for every player, no matter whether he's an All-Pro quarterback or the last man on the roster. For every year a player's been in this NFL, he gets a bump in pay. And if a player makes it through his third season, he can never be cut from the roster until he chooses to retire, except in the most extreme cases of misconduct. Let's face the truth about this alternate reality: The on-field product would steadily decline. Why bother playing harder or better and risk getting hurt? 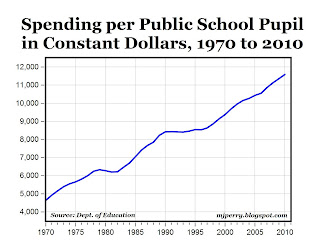 No matter how much money was poured into the league, it wouldn't get better. In fact, in many ways the disincentive to play harder or to try to stand out would be even stronger with more money. Of course, a few wild-eyed reformers might suggest the whole system was broken and needed revamping to reward better results, but the players union would refuse to budge and then demonize the reform advocates: "They hate football. They hate the players. They hate the fans." The only thing that might get done would be building bigger, more expensive stadiums and installing more state-of-the-art technology. But that just wouldn't help.

If you haven't figured it out yet, the NFL in this alternate reality is the real -life American public education system. Teachers' salaries have no relation to whether teachers are actually good at their job—excellence isn't rewarded, and neither is extra effort. Pay is almost solely determined by how many years they've been teaching. That's it. After a teacher earns tenure, which is often essentially automatic, firing him or her becomes almost impossible, no matter how bad the performance might be. And if you criticize the system, you're demonized for hating teachers and not believing in our nation's children.

Perhaps no other sector of American society so demonstrates the failure of government spending and interference. We've destroyed individual initiative, individual innovation and personal achievement, and marginalized anyone willing to point it out. As one of my coaches used to say, "You don't get vast results with half-vast efforts!"

Our rigid, top-down, union-dictated system isn't working. If results are the objective, then we need to loosen the reins, giving teachers the ability to fulfill their responsibilities to students to the best of their abilities, not to the letter of the union contract and federal standards."

Grouch: Do you agree with Tarkenton's position?