The hardest and most profitable thing to do in investing is go against investor sentiment and buy those companies that are solid but hated by most investors. In a market that many argue is getting frothy, two opportunities stand out-- BP and Digital Realty.

BP was one of the most hated and shunned stocks after the Gulf Oil spill. This was perhaps the ideal time to buy for those with really strong stomachs, but the average investor rarely has the nerve. Now that several years have passed since the disaster, BP is beginning to regain its footing and return to normal exploration activities with a previously missing emphasis on safety. Compares to its peers, such as Exxon Mobile at 2.8%, BP yields approximately 4.9% and is selling for 8-9 times the estimate of 2014 earnings. Investors have not fared well with BP over the past decade, which saw the stock reach a high of $80 in 2007 and a low of $25 after the Deep Sea Horizon spill. However the risk/reward ration seems to be turning in favor of BP shareholders, who will be paid a handsome dividend as the marketplace slowly regains confidence in BP. As an added kicker, BP has already repurchased $3.3 billion worth of shares over the past quarter as part of its $8 billion share repurchase program. As such BP retired 2.3% of its shares outstanding over the quarter. This pace cannot continue, but shareholder friendly uses of cash through dividends and buybacks are always a well alternative to management wasting cash overpaying for merger and acquisitions.

Digital Realty is a real estate investment trust that specializes in acquiring and leasing data center space to companies who don't think it is economical to build and run data centers themselves. DLR reported earnings last week and disappointed with marketplace with a miss and downward earning guidance that saw its stock punished by a 20% drop in price. Funds From Operations (or FFO) came in at $147.4 million ($1.10 per share), down slightly from $148.9 million ($1.13 per share) in the year-ago quarter. The company said the third-quarter results included a non-cash, straight-line rent expense adjustment of 7 cents per share related to the company's leasehold interest at 111 Eighth Ave. in New York City. Analysts expectations were $1.20 a share for the quarter. DLR guided down future FFO to $4.60-$4.62 for 2013, down from previous estimates of $4.73-$4.82. A 20% drop in market seems like overkill for the miss and downward guidance. Though confidence has been shaken in DLR management, the stock still represents a bargain compared to other REITS at a yield of 6.5% and a P/FFO at around 10. I'll ride the 6.5% dividend as I wait for the stock to recovery and FFO growth to resume. The annual dividend of $3.12 leaves some room growth on a projected FFO of $4.60. At some point in the future, the market will correct its overreaction. 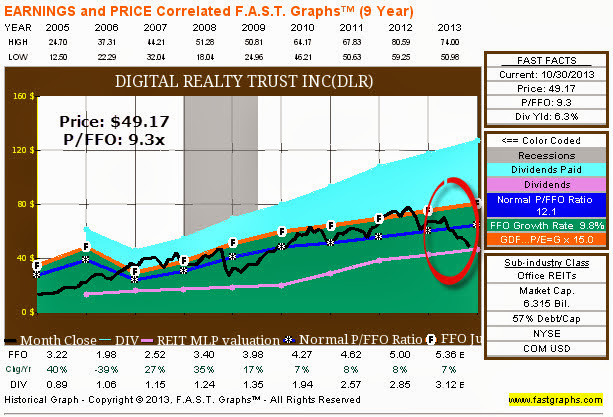