How Effective Has the Debt-Ceiling Been in Putting a Ceiling on the Growth of Debt? 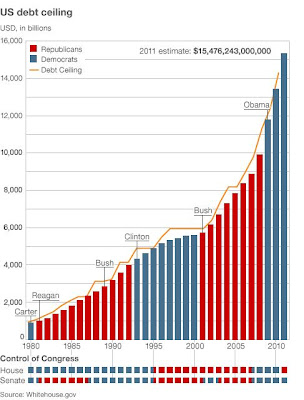 The obvious answer is not very effective. In fact, the pace of debt accumulation debt has picked up substantially in the past 10 years. Where is the shame and remorse on the part of Congressmen and Presidents who play this con game (tax increases up front and spending cuts that never materialize) with the American people? What about some shared sacrifice where government takes the hit and feels the pain? It certainly wasn't on display in last night's speeches.

Thomas Sowell writes today about this game of "debt-ceiling chicken":

Regardless of what it is supposed to do, what the national debt-ceiling actually does is enable any administration to get all the political benefits of runaway spending for the benefit of their favorite constituencies -- and then invite the opposition party to share the blame, by either raising the national debt ceiling, or by voting for unpopular cutbacks in spending or increases in taxes.

The Obama administration is a classic example. When all its skyrocketing spending bills were being rushed through Congress without even being read, the Democrats had such overwhelming majorities in both the Senate and the House of Representatives that Republicans had all they could do to get a word in edgewise -- even though their words had no chance of stopping, or even slowing down, the spending of trillions of dollars.

Now that the bill is coming due for all that spending and borrowing, Republicans are suddenly being invited in to share the blame for either raising the national debt ceiling or for whatever other unpopular measures will be legislated.

Many years ago, someone said, "If you didn't invite me to the big take-off, don't invite me to the crash landing." This was Obama's big spending spree, but "bipartisanship" requires Republicans to either split the bill or be blamed if the government shuts down or defaults.

What would happen if there were no national debt-ceiling law?

Those who got the political benefits from handing out trillions of dollars of the taxpayers' money (plus borrowed money) would also get the clear and sole blame for the resulting skyrocketing national debt and all the unpopular consequences."
Posted by The Grouch at 8:04 AM